Go off the beaten track with us on our holidays to Vietnam. Some people might still associate Vietnam with its infamous war and history but, since being officially united again in 1975, the country is moving on from its dark past and is at peace. Today Vietnam has so much to offer for everyone; breathtaking landscapes, vibrant cities, tranquil villages, historic sights, incredible cuisine and a fascinating culture. All of our holidays to Vietnam include accommodation and an expert local guide to show you the way on exciting excursions.

With its spectacular coastline, ancient pagodas, lively cities, delicious food and exotic culture, it’s no wonder Vietnam is top of many holiday wish lists. On our holidays to this incredible country, we’ll have the opportunity to discover it all as we visit must-see highlights and enjoy authentic experiences with the help of an expert, local guide. When you travel with us to Vietnam, we’ll go beyond the standard holiday and immerse ourselves in the culture of this beautiful country. We’ll take a scenic bike ride through rural countryside in Tam Coc, kayak and swim in Ha Long Bay, experience the floating markets of Cai Rang, and climb the famous Marble Mountains. Our holidays include a variety of excursions, so whether you’re interested in Vietnam’s history, local customs or breath-taking scenery, there’s something for everyone.  From the emerald waters of Ha Long Bay to the buzzing cities of Hanoi and Ho Chi Minh, our trips to Vietnam are sure to create memories that last a lifetime.

Departures from Ireland include return flights and customers from other countries have the flexibility to arrange their own flights and join the group at the start point of our exciting Vietnam tour. 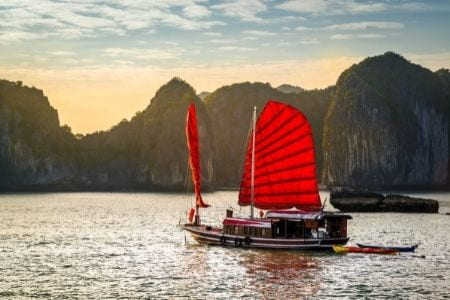 Top Places To Visit In Vietnam 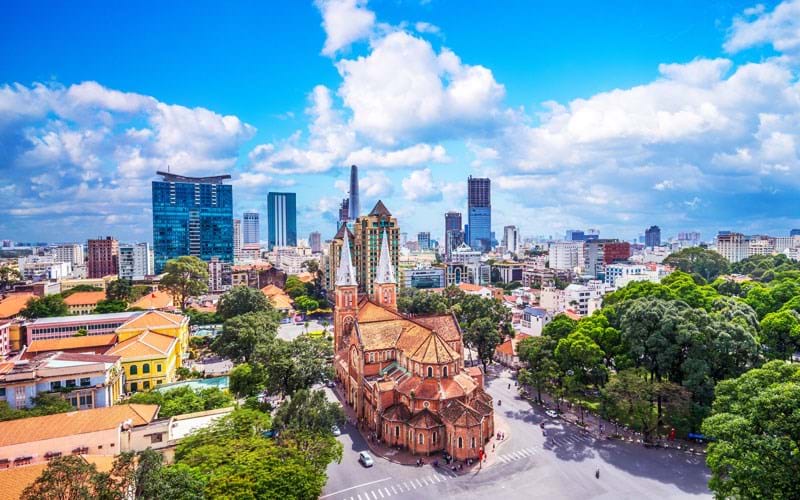 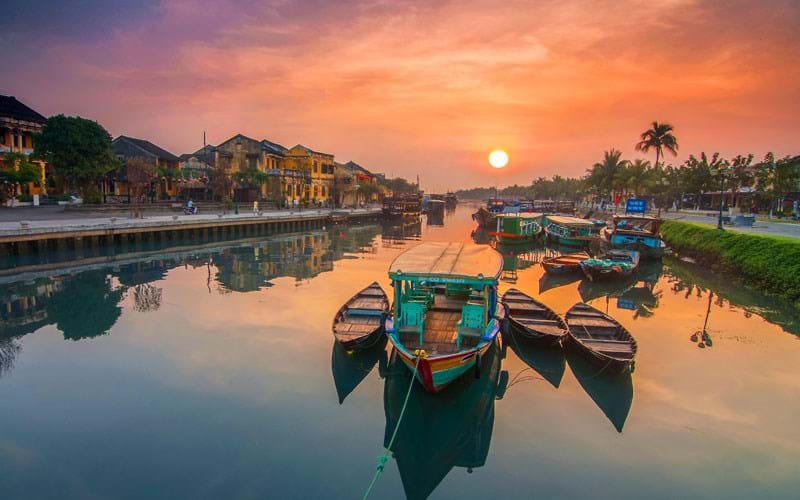 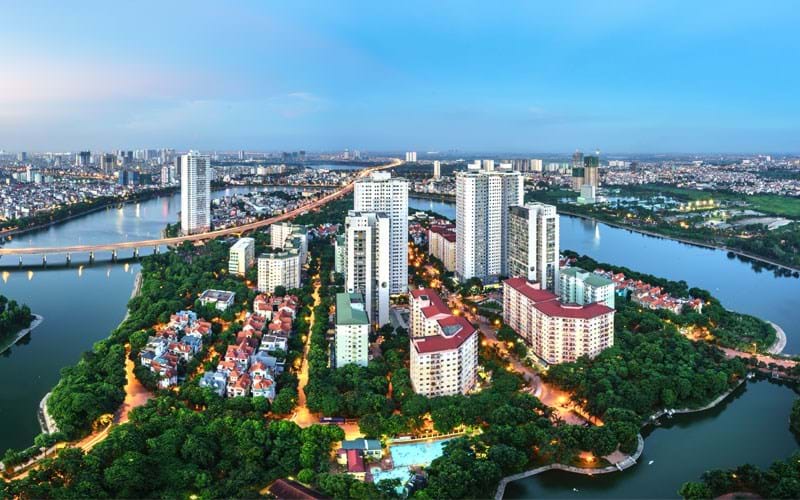 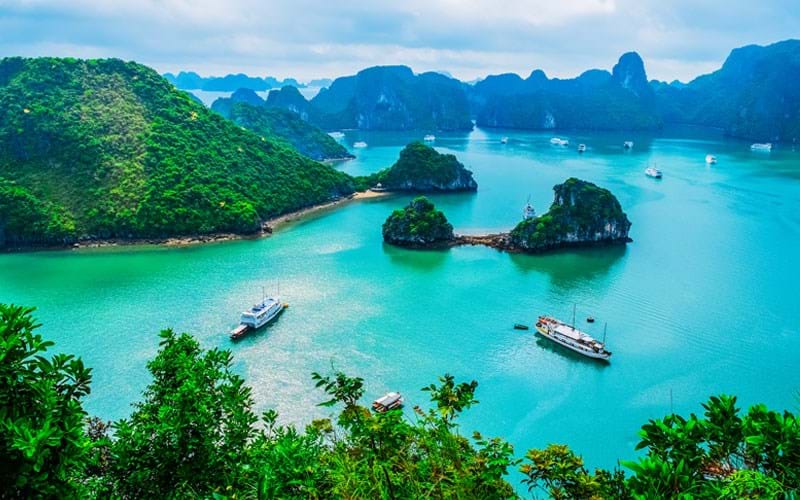 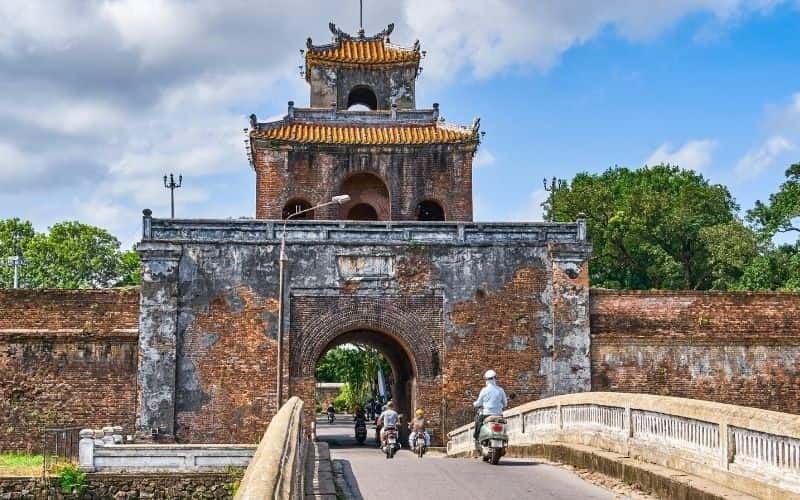 Originally named Saigon, Ho Chi Minh city was renamed after it was taken back from the US Army during the Vietnam War to honour the North Vietnamese leader Ho Chi Minh. Today, it is the most populous city in Vietnam and a must-see for those interested in the country’s history. On our holidays including Ho Chi Minh city, we’ll explore authentic local markets in China town and experience local life. We'll also visit iconic sites like the War Remnants Museum, the Reunification Palace, the former South Vietnam Presidential Palace, the Notre Dame Cathedral and the Old Post Office.

Located on Vietnam’s central coast, the city of Hoi An is a cultural melting pot, with influences from the Chinese, Japanese and French. The city’s ancient old town is a well-preserved example of a trading port dating from the 15th to 19th centuries and is easily explored on foot. On our holidays to Vietnam including Hoi An, we’ll see the city’s 400-year old Japanese Covered Bridge, explore its colourful local market and take a cyling excursion along the waterside local villages of Cam Man.

The bustling capital of Vietnam, Hanoi, is one of the most ancient capital cities in the world and has been inhabited since about 3000 B.C. Today, the city is a unique mix of colonial-era buildings, ancient temples and modern structures. On our holidays to Vietnam including Hanoi, we’ll enjoy a full day city tour to take in the top highlights and experience a cyclo ride through the animated streets of Hanoi's Old Quarter.

Ha Long Bay is arguably the most famous of Vietnam’s attractions. This stunning UNESCO World Heritage Site is home to thousands of towering limestone islands topped with dense rainforests. The bay’s blue-green waters are calm and clear during the spring and early summer and many of the surrounding islands have small alcoves with sandy beaches where it is possible to swim. On our holidays to Vietnam including Ha Long Bay, we’ll have the opportunity to explore this incredible natural wonder on an overnight cruise and kayak around Man’s Head Islet.

Hue is a city rich in history, during the Nguyen Dynasty between 1802-1945 it was the capital of Vietnam. On our Vietnam trip we'll uncover the Imperial City of Hue, which was inspired by the Forbidden City in Beijing, this huge complex is filled with many palaces, monuments and temples. Take a leisurely stroll along the beautiful Perfume River, which crosses through Hue, and enjoy some street food, this city is renowned to have some of the best food in Vietnam. 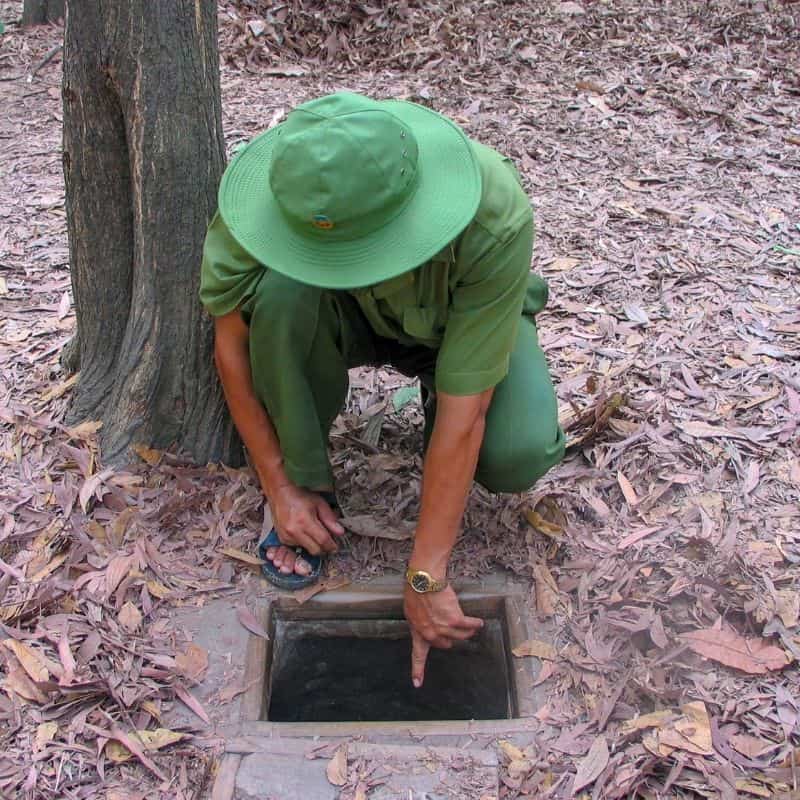 Used by the Viet Cong during the Vietnam War, the Cu Chi Tunnels served as hiding places, communication and supply routes, field hospitals, and even living quarters. Spanning more than 250km and descending 3 floors over 12 metres in depth, this vast network of tunnels is an incredible engineering marvel. Today, the tunnels have been restored to allow visitors to experience what underground life was like during this conflict.

This marvellous neo-Romanesque style building was established by French colonists in the 19th century. It is situated in the very heart of Ho Chi Minh City at the Paris Square. All materials necessary for the construction of the basilica were imported from France. 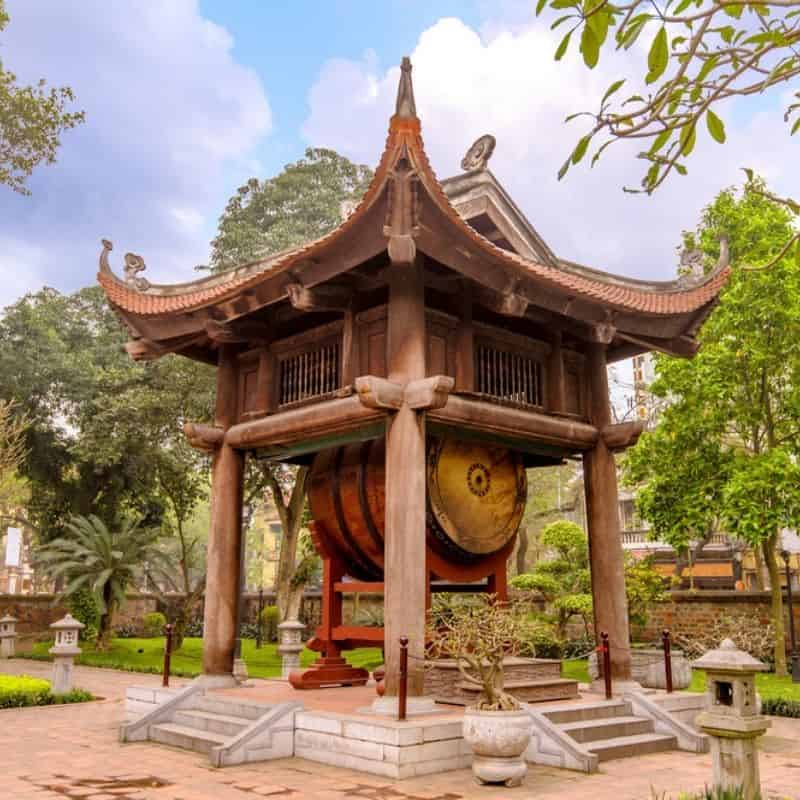 A temple dedicated to the philosopher Confucius, it's located in Hanoi and is also known as Van Mieu. It was founded in 1070 by Emperor Le Thanh Tong and was the site of the first university in Vietnam, Quoc Tu Giam. The temple is also featured on the 100,000 Vietnamese dong banknote. 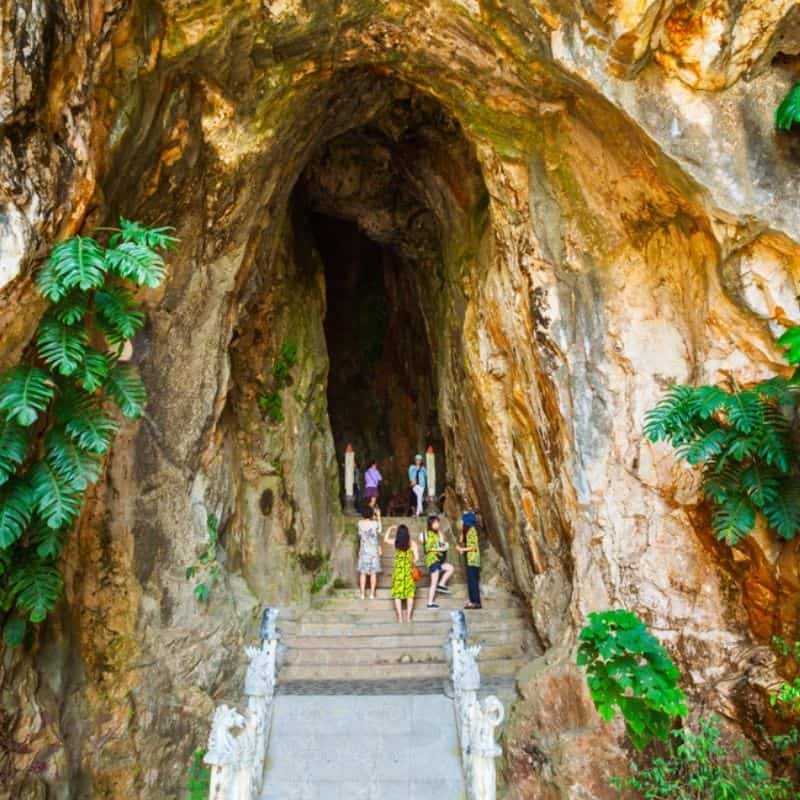 This mountain range consists of five peaks and is a popular tourist site, and is often called the Mountains of Five Elements. The five peaks are called Thuy Son (water), Moc Son (metal), Tho Son (soil) and Hoa Son (fire). 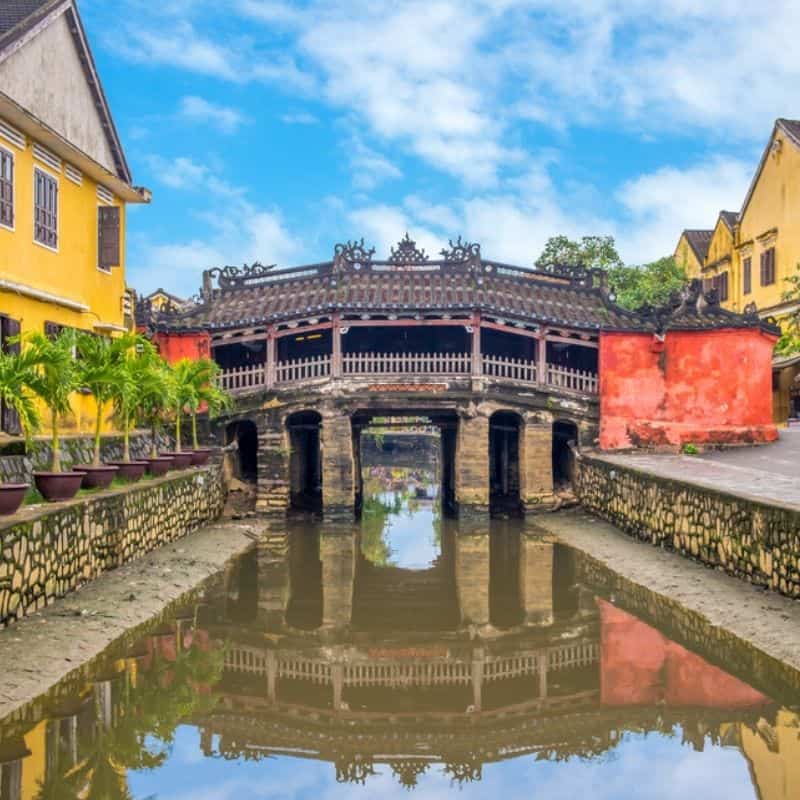 One of the top sights in Hoi An, this bridge was first built in the 1590s by Japanese merchants in order to reach the Chinese quarter.  It’s located in the centre of the old town of Hoi An,  a UNESCO World Heritage site. 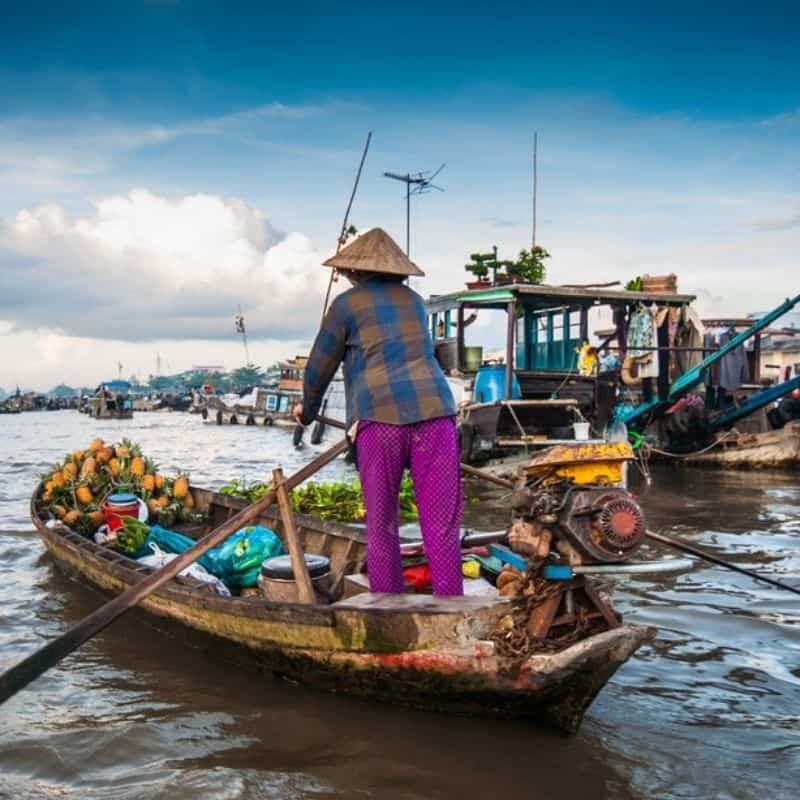 Experiencing the colourful floating markets of Vietnam's Mekong Delta is a must for any travel bucket list. The biggest floating market in the Mekong Delta, where boats of various sizes sell their produce on the river. You don’t need to even purchase anything, it’s a wonderful and unique experience to soak up the vibrant atmosphere and to see what the locals buy.

Useful Information For Your Holiday To Vietnam

To make your holiday as smooth as possible, we’ve outline some general information that may be helpful to you when planning your getaway to Vietnam. 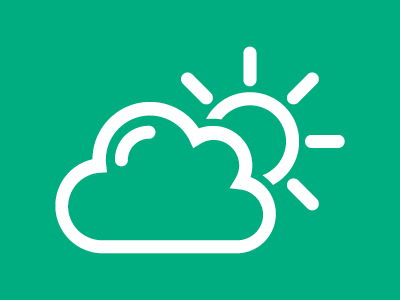 Due to the length of the country, the weather can vary significantly from one region to another. Tropical monsoons occur from October to April in the central region and from May to September in the north and south. It is almost totally dry throughout the rest of the year. It can get exceptionally hot, all year round, but the north has a cooler time between October and April. Temperatures around the country can reach up to 40C° in the pinnacle of the hot and rainy season (May to September), but the northern highlands and the capital Hanoi can often seem cold in the winter months. 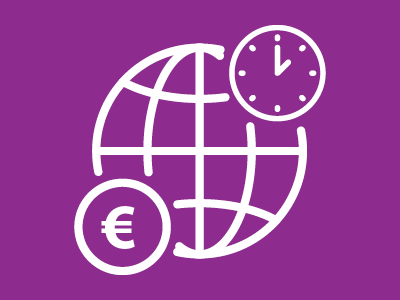 Vietnam is seven hours ahead on Greenwich Mean Time (GMT) throughout the year. The Vietnamese currency is the Dong. 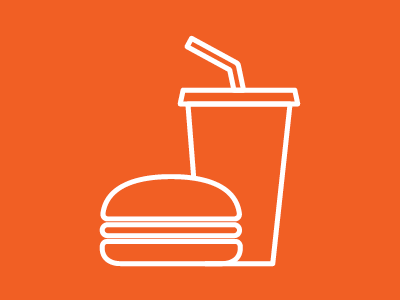 Profoundly influenced by the cuisines of France, China, and Thailand, Vietnamese cooking is highly innovative, fragrant, spicy, light and delicious. Duck and beef dishes are popular, as are crispy spring rolls with dipping sauces. The nation’s favourite dish is ‘pho’, a spicy noodle soup, with variations in recipe according to region and family. French colonial influence means superb crusty baguettes and sweet pastries as good as those served in France, at a fraction of the price! Green tea is the national drink, and Vietnam also produces beers. 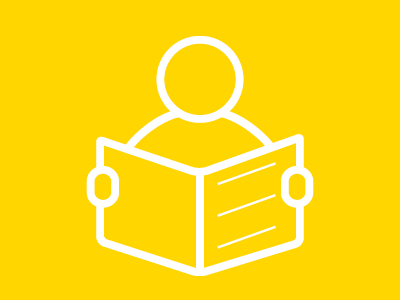 Reading For Your Trip

Do I require a holiday visa for Vietnam?

Irish and UK citizens require a visa to enter Vietnam. Passports must be valid for at least 6 months. Remember to bring a printed copy of your Tourist Visa approval email. If your visa is stamped in your passport, no additional documentation is required.

Do I need vaccinations for Vietnam?

Vaccinations are not essential for your itinerary. However you should consult with a suitably qualified medical professional for individual advice. If you require a particular medication, ensure that you take an adequate supply, as it may not be available locally.

Will I be met in the airport when I arrive in Vietnam?

If you are departing from Dublin you will be met at Hanoi Airport. The approximate journey time to your hotel in Hanoi is approximately 40 minutes. For arrivals from other departure points, we can provide a complimentary transfer.

Is it safe to tour Vietnam?

Although serious or violent crimes against tourists in Vietnam are rare, we advise you to remain vigilant and keep a close eye on your belongings, especially in larger cities like Hanoi and Ho Chi Minh City, and when travelling on public transport. Leave your expensive items at home and use the hotel safes for your valuables.

Which clothes should I pack for my Vietnam trip?

Apart from when visiting temples, monasteries and pagodas, where you’ll need to dress conservatively, you don’t need to be concerned about wearing inappropriate clothing in Vietnam. If you’re visiting north of Hoi An between October and March, it can be cool so pack some layers. The rest of the year, and in the south, flip-flops or sandals, a cotton T-shirt and shorts are likely to be your daily uniform. We would recommend covering your arms and legs in the evenings to avoid mosquito bites. An umbrella will be useful to have as it’ll offer protection in both the hot and rainy seasons.

Can I drink tap water in Vietnam?

We would advise not to drink tap water. Bottled water is safe and can be easily purchased. Most of the hotels we use provide a complimentary bottle of mineral water, per person, in the room.  Ice is usually okay in good standard hotels and restaurants, but it would be best to avoid it at street stalls or in rural areas.

How good is the internet in Vietnam?

Major hotels throughout the country offer both free Wi-Fi access and business centres with timed computer use. Vietnam has an exceptional amount of cafés and restaurants offering free WIFI connections, if having a meal or a drink internet fees are normally waived. If using your mobile phone, it is best to buy a local sim card to avoid expensive roaming charges.

What advice do you have for tipping in restaurants while in Vietnam?

Tipping for good service is not expected but is always appreciated.

What kind of plugs / sockets are used in Vietnam?

The standard electrical supply in Vietnam is 220V. Both flat and round two-pin outlets are used throughout the country. We recommended to bring a universal plug adaptor.

Top 5 things to do in Hoi An 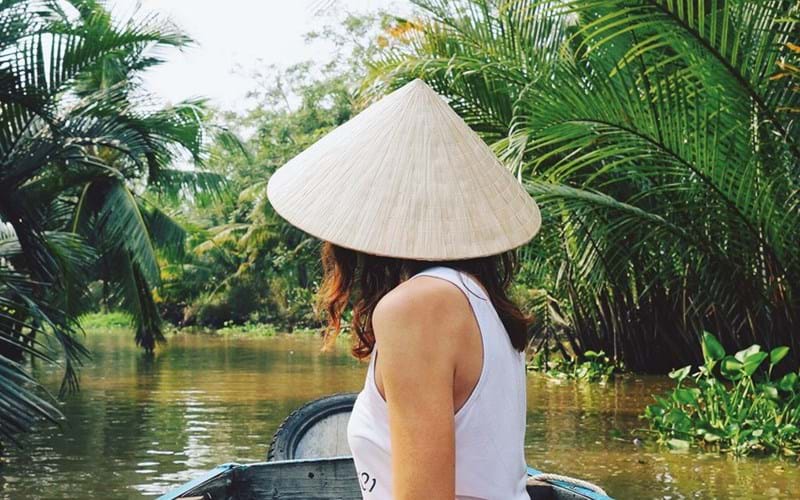 Northern Vietnam in a nut shell

Vietnam combines history, culture, stunning scenery & tasty cuisine. There are so many reasons to visit, but here are a few of our...